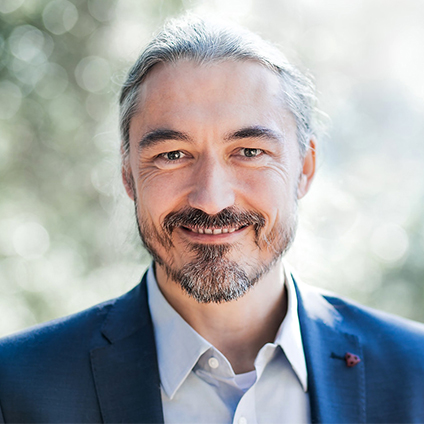 Trauma is the water we are swimming in. Like fish, we are largely unaware of the hidden effects of ancestral and collective trauma on our personal lives, careers and cultural and political realities.

In this conversation with spiritual teacher Thomas Hübl we discuss what trauma is, how to address it from a collective trauma-aware perspective, and the shifts necessary within organisations to foster coherence and innovation.

What is Collective Trauma

Many people think that trauma is the terrible events that happened t us. But trauma is actually the trauma response that happens within the body’s nervous system. Trauma occurs when a person goes through an overwhelming experience that the person’s system cannot compute. The nervous system can split off a part and numb it; this piece remains but will be in the unconscious.

At the core of it there’s a sense of separation and isolation – feeling separate and withdrawn. At the systemic level, the collective trauma, many people can be simultaneously traumatized. Essentially, we are born into a traumatized world, which impacts us as well as our individual experienced trauma.

Integrated history is presence; unintegrated history is trauma. “I feel you feeling me” is the basic requirement for feeling safe in relating. When this is chronically lacking in childhood due to an emotionally absent parent, a deep lack of safety ensues.

Often what people pursue in their careers is in some way an attempt to compensate for that dysregulation, so our role as coaches become giving space to that compensation so that it can relax and a new possibility comes online.

Trauma creates disembodiment and absence in the body. Nature wants to heal, and we need to become allies of the self-healing mechanism of life to facilitate our own healing through an inner detox mechanism.

By following this innate releasing process by attuning to it and potentially having some assistance via a coregulator, we can allow the system to bring itself back into balance through its own intelligence, rather than an external agenda.

Organizations need to learn to recognize the amount of fragmentation that exists and learn new ways of facilitating greater coherence. Coherence exists when there is flow in the nervous system between the body, emotions and mind – this is the foundation for all innovation.

Thomas Hübl is a modern mystic, a spiritual teacher whose work integrates the essence of the great traditions of wisdom with scientific knowledge and his own personal experience. He offers a unique approach for living as a “mystic in the marketplace,” guiding people towards a deeper level of self-awareness and personal response-ability. Since 2004, Thomas’ work has spread worldwide, through workshops, multi-year training programs, online courses, the Celebrate Life Festival, the Academy of Inner Science (AIS) and the Pocket Project.